Maria Chalkou at the 4th ROUND TABLE 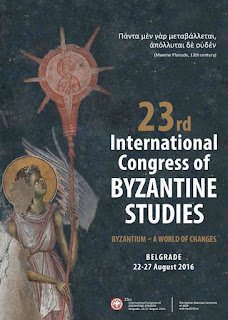 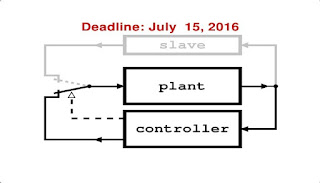 Please "share" to help distribute. Thanks.
Abstraction-based controller synthesis is a relatively recent approach whose key advantage over classical synthesis methods is that it permits to solve control problems for nonlinear continuous-state plants described by ordinary differential equations in a fully automated, correct-by-construction fashion, even for rather complex control objectives and in the presence of uncertainties and disturbances. The approach relies on finite-state approximations (``abstractions'') of continuous-state plants described by ordinary differential equations.........
https://www.linkedin.com/pulse/phd-scholarship-fully-automated-controller-synthesis-uav-reissig
Αναρτήθηκε από Maria Chalkou στις 9:14:00 π.μ. Δεν υπάρχουν σχόλια:

Dedicated to all the participants of the International Congress on Mathematics MICOM- 2015, September 22-26, Athens, Greece.
Dedicated to all the colleagues and friends who were there in Borovets of Boulgaria, in the year 2003 at the first International Congress on Mathematics MASSEE 2003, hoping strongly to meet all of them in Athens.
Au sens réciproque!!!
Tu resteras dans ma memoire comme un bonheur comme un regret!!!
﻿DEDICATED TO THE PARTICIPANTS OF THE INTERNATIONAL CONGRESS MICOM 2015
Αναρτήθηκε από Maria Chalkou στις 11:46:00 π.μ. Δεν υπάρχουν σχόλια:

NUMBER THEORY IN BYZANTIUM ACCORDING TO CODEX VINDOBONENSIS PHIL. GR. 65: THE NUMBERS AND THE POSITIONAL NUMERAL SYSTEM

The 2nd issue of the scientific Journal, of the A.I.M.S., and of the A.I.C., Macedonian Studies Journal.

The first issue of the of the A.I.M.S., and of the A.I.C., Macedonian Studies Journal

The first issue of the of the A.I.M.S., and of the A.I.C., Macedonian Studies Journal has already been published in the webpage of the A.I.C., (follow the link)
http://www.academy.edu.gr/index.php/en/msj
Αναρτήθηκε από Maria Chalkou στις 8:24:00 μ.μ. Δεν υπάρχουν σχόλια:

The site "LEXIKON ZUR BYZANTINISCHEN GRÄZITÄT"  is the result of a collaboration between the Lexikon zur byzantinischen Gräzität (LBG) published by the Austrian Academy of Sciences (Die Österreichische Akademie der Wissenschaften) and the Thesaurus Linguae Graecae® (TLG®) at the University of California, Irvine.
The LBG is the foremost lexicographical resource in Byzantine Studies mainly covering the period from the 4th to the 15th century A.D. taken from more than 3,000 texts. Seven fascicles have appeared to date, with one more scheduled to appear in 2016. When completed the dictionary will consist of more than 2,000 printed pages, containing approx. 80,000 lemmata.
In March 2012, the LBG and TLG began conversations about digitizing the existing volumes of LBG and linking them to the TLG texts.  The TLG team (Nick Nicholas, Maria Pantelia and John Salatas) worked on converting the files into XML format and incorporating them into the TLG online system. The first six fascicles have been included in this release covering letters A-P. They can be accessed at: http://stephanus.tlg.uci.edu/lbg.
The LBG was initiated by Erich Trapp – in collaboration with Wolfram Hörandner and Johannes Diethart – in the early 1990s. It became a joint project of the Commission for Byzantine Studies at the Austrian Academy of Sciences, the Department of Philology at the University of Bonn and the Department of Byzantine and Modern Greek Studies at the University of Vienna, financially supported by the Austrian National Science Fund (FWF).
Astrid Steiner-Weber, Sonja Schönauer and Maria Cassiotou-Panayotopoulos contributed to the project at Bonn University with the financial support of the German Research Foundation (DFG),. The Lexicon is now continued at the Division of Byzantine Research of the Institute for Medieval Research at the Austrian Academy of Sciences under the guidance of Erich Trapp (Vienna/Bonn). Members of the team in Vienna include Carolina Cupane, Andreas Rhoby and Elisabeth Schiffer.
LBG and TLG® wish to acknowledge the contribution of the Austrian Academy of Sciences that has generously supported the creation of the LBG and has now agreed to its online dissemination for the benefit of the scholarly community.
Maria Pantelia
TLG Director
Link (look at mathvind)
Some details about the writing of the book-source
Αναρτήθηκε από Maria Chalkou στις 10:51:00 π.μ. Δεν υπάρχουν σχόλια:

The copyright and the Intellectual Property of the Edition of the Codex Vindobonensis phil. Gr. 65, a Hellenic Manuscript found at the Austrian National Library in Wien

'The Pythagorean Rule' at BSHM Bulletin: Journal of the British Society for the History of Mathematics Volume 23, Issue 2, 2008

Ptolemy's Theorem in the Hellenic Codex 72 of the 18th century

An Introductory Tutorial into 3D Visualisation of Cultural Heritage

An Introductory Tutorial into 3D Visualisation of Cultural Heritage will be held in Golden Sands Resort, Varna, Bulgaria, September 10, 2014. This seems to be unique opportunity for those willing to see how to use affordable tools for 3D scanning.

The tutorial is an acompanying event to AIMSA conference, see for more information below or on the conference website http://www.aimsaconference.org/